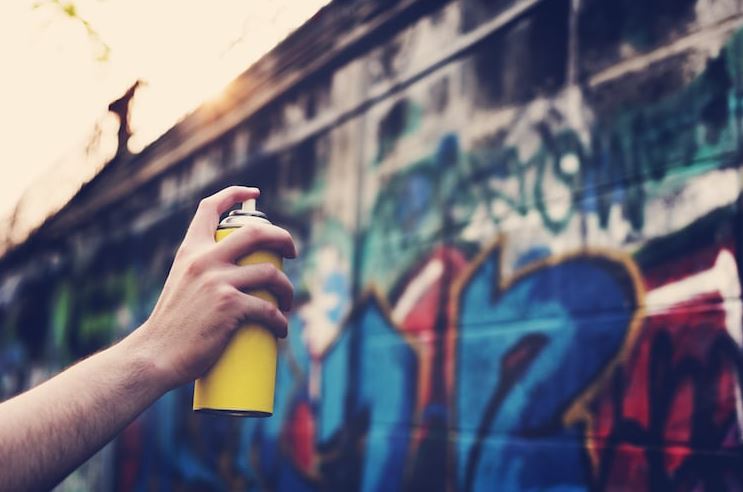 The very first graffiti writer or artist is considered to be cornbread, this young high-school artist or student started tagging city wall back in 1967. He lived in Philadelphia and started the wall-tagging to attract the attention of a young girl. Although graffiti was only showcased as an art form in the 1980’s.

The Origin of the Art Form Name – Graffiti

Graffiti was first known as a graffito in its singular form and are formed from the Italian word that means scratched, graffiti. During ancient times it was the carve with a sharp object on walls and graffiti also included coal or chalk use. The word is also based on γράφειν, the Greek word directly translated is graphite which means to write.

The invention of street art can be traced back to the name tagging or the scratching of names into concrete or walls in New York during the late 1960’s. Graffiti artists work started inspiring others like Keith Haring in the late 1970’s and early 1980’s, who did the NYC subway chalk drawings well before this art form was to feature or found its place in the art world.

The major difference between street art and graffiti is the intention. Graffiti is used by a writer who are not focused on the understanding, or the interest of others in their work, these artists are most appreciated for their art style. What is one of the major risks of graffiti is that in most countries it is a punishable crime should the artist add graffiti to a wall or property, without the consent and/or permission of the property owner. It is only lately that graffiti artists are hired by governments to add art to walls in subways as part of their marketing strategies in advance of huge sports events.

Yet in many countries such as Canada, it falls under the criminal code and it is still not considered as an art form. Graffiti is seen as vandalism and in all the major cities such as Calgary, Vancouver, Montreal and Toronto any graffiti is illegal, and the owner of the property is required to remove it by law.

Graffiti is Welcomed and Legal in Several Countries

In many other countries, graffiti is legal, acknowledged as an art form and even welcome. The places where graffiti is welcomed include Melbourne, Australia where graffiti can be seen in Hosier Lane, In Poland, graffiti is legal in Warsaw as well as Queens in New York and in Prague it is well-known for decorating the area near Florence Metro Station, it is also allowed in Paris, Zurich in Switzerland, Taipei in Taiwan, Copenhagen and Sydhavnen in Denmark, in New Zealand in most parks and in South Africa along all the main highways as well as around sports stadiums.