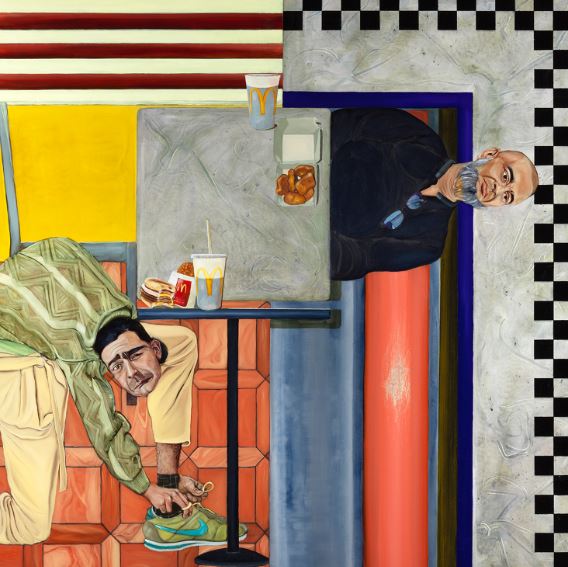 One of the most exciting artists right now is Salvatore of Lucan and during a recent art exhibition, his painting titled, Me and My Dad in McDonalds were one of the most favoured for its brightness, colour and art form.

Due to the popularity of his artwork, it is only natural that art enthusiast wants to know more about the artist himself. In the 1980’s in Munich, a man from Bangladesh fell in love with an Irish girl and after they separated, she discovered she was pregnant. She gave birth to a beautiful boy back in Dublin and named him Salvatore. The father of Salvatore visited for a week when he was around one year of age and the boy saw his father many years later when they reconnected via social media. Salvatore was 24 years of age at the time and his father was based in Miami, they decided to meet in New York. No further plans were made to meet again, although Salvatore captured the meeting in a portrait and when it was displayed at the National Gallery, he won the portrait prize in Zurich.

Meeting Dad After 23 Years in McDonalds

The setting Salvatore chose for his painting is McDonalds, although in reality, the two men met at the Katz Deli, although the young painter decided on a unique painting style, now favoured by millions for its fine detail, loud colours, squares, lines and other patterns that creates a phenomenal effect. The father figure in the painting has a beard an appears to stare into space, while the table top displays cola-shadowed cups. The details added to Salvatore’s painted image is enhanced by the zigzag shirt he is wearing as well as his mustard pants and Nike’s. At first glance, his head looks out of place, although the artist says he always wanted to paint his head and body this way.

Salvatore grew up surrounded by women, which includes his mother, half-sister and his grandmother, and he loves to work with people closest to him. He focuses on the people of Lucan in his art, which includes Jinx Lennon the punk poet from Ireland, British pop rock band Pulp and Myles Manley. Salvatore first spent time as a hairdresser as his mom not think he could make a living from art. He got his NCAD and started by painting self-portraits, which also included him kissing his ex-girlfriend as well as him playing Fifa on his Xbox. He is currently busy painting himself with his new girlfriend Lucy with him holding her leg.

Me and My Dad in McDonalds by Salvatore of Lucan

The Me and My Dad in McDonalds painting is an archival pigment print embellished with hand embellished pigment paint that glows in the dark, the painting is 680 mm x 680 mm in size and was painted in 2018, while the cotton rag painting was also numbered and signed by the artist.