We are only in February, but already several top February film releases have already made their debut in cinemas up and down the country. There is a fairly reasonable chance that you will already have made it out to theatres to watch Paddington 2, or Black Panther, but what else is in store for moviegoers in 2018. Let’s have a peek at some of the top titles coming your way this year.

Arriving on March 23 is Pacific Rim: Uprising. The sequel to Guillermo del Toro’s often criticised predecessor, and starring Star Wars hero John Boyega, this film is Steven S. DeKnight’s turn to take the helm. We’ve got a feeling it will all get very Power Rangers like, but what pre-teen won’t get their kicks out of that?

Everybody loves a blockbuster, right? Well, critics usually don’t, but we’re not interested in what they think here. The first big blockbuster to hit cinemas this year is set to be Tomb Raider. Based on the world-famous rebooted video game of the same name, Academy Award winner Alicia Vikander is stepping up to the plate as heroine Lara Croft, as she attempts to track down her dad and survive. Don’t expect too much archaeology in this flick, but here’s to hoping she proves a better Lara Croft (more in line with the original video game character) than her lacklustre predecessor, Angelina Jolie did.

Dwayne Johnson seems to pour out film after film of late (few of which are particularly memorable) but he’s a big box office lure, so it is not surprising that fresh from his Jumanji adventures, he’s set to star in Rampage, another video game to film project. Giant monsters destroying cities, with The Rock there to save the day; tiresome, yes? Is it worth a look for special effects alone? Probably.

Deadpool 2 is a film we’re all excited to see. Ryan Reynolds’ ever so naughty Deadpool is set to tangle with Cable (John Brolin) in the next instalment of this dead-pan comedy franchise. It’ll have swearing, it’ll have crudeness (aplenty), and it’ll have fighting. We can’t wait. 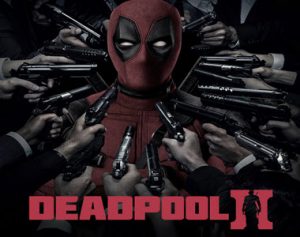 Ignoring yet another superhero movie (The Avengers: Infinity War) because, quite frankly, we’re bored of them, Star Wars is set to launch its next spin-off. Solo naturally focuses on a young Han Solo (who looks nothing like Han Solo) and Lando Calrissian (who looks nothing like Lando Calrissian) in their pre-Rebel years. The cast is impressive, and although the last spin-off outing (Rogue One) was a hit, we’re not sure the necessary baggage the film comes with (re-writes, changes of directors, the list goes on) is going to make it any good. Given that The Last Jedi was poor, okay, that’s an understatement; we really need Disney to pull it out of the bag here.

Also making their debut in cinemas later this year are Jurassic World: Fallen Kingdom, The Incredibles 2, Mission Impossible: Fallout, The Predator, Halloween, Bohemian Rhapsody, and Mary Poppins Returns. If you love your blockbusters (excluding the endless parade of superhero movies), 2018 could be a good year for you.